This section will discuss some ways to relate GAMs to other forms of nonlinear modeling approaches, some familiar and others perhaps less so. In addition, I will note some extensions to GAMs to consider.

It should be noted that one can place generalized additive models under a general heading of nonlinear models whose focus may be on transformations of the outcome (as with generalized linear models), the predictor variables (polynomial regression and GAMs), or both (GAMs), in addition to those whose effects are nonlinear in the parameters37 38. A primary difference between GAMs and those models is that we don’t specify the functional form of features beforehand with GAMs.

In cases where the functional form may be known, one can use an approach such as nonlinear least squares, and there is inherent functionality with base R, such as the nls function. As is the usual case, such functionality is readily extendable to a great many other analytic situations, e.g. the gnm for generalized nonlinear models or nlme for nonlinear mixed effects models.

As noted, it is common practice, perhaps too common, to manually transform the response and go about things with a typical linear model. While there might be specific reasons for doing so, the primary reason many seem to do so is to make the distribution ‘more normal’ so that regular regression methods can be applied, which stems from a misunderstanding of the assumptions of standard regression. As an example, a typical transformation is to take the log, particularly to tame ‘outliers’ or deal with heteroscedasticity.

While it was a convenience ‘back in the day’ because we didn’t have software or computing power to deal with a lot of data situations aptly, this is definitely not the case now. In many cases it would be better to, for example, conduct a generalized linear model with a log link, or perhaps assume a different distribution for the response directly (e.g. log- or skew-normal), and many tools allow analysts to do this with ease39.

There are still cases where one might focus on response transformation, just not so one can overcome some particular nuisance in trying to fit a linear regression. An example might be in some forms of functional data analysis, where we are concerned with some function of the response that has been measured on many occasions over time. Another example would be in economics, where they like to talk of effects in terms of elasticities. 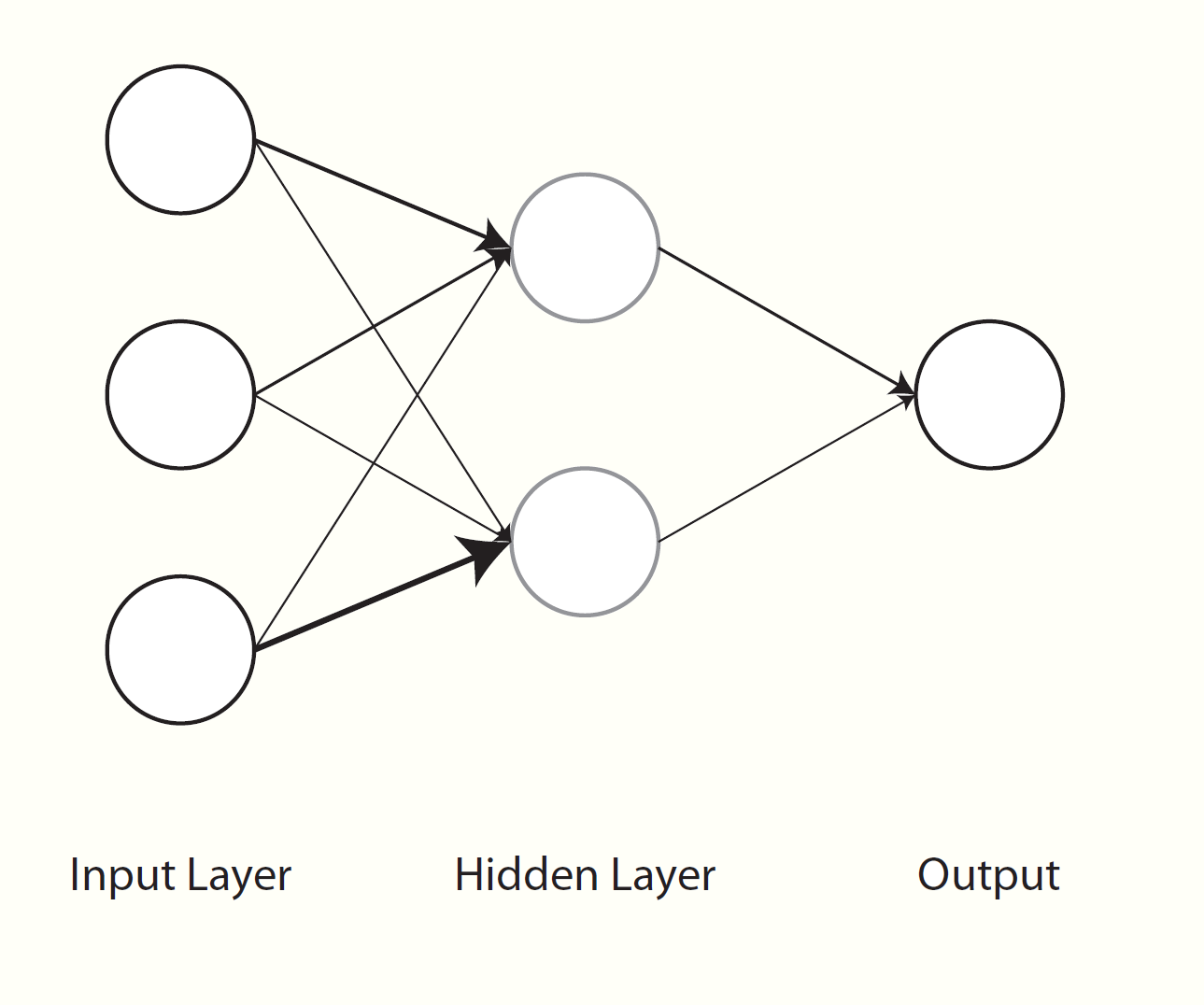 Venables and Ripley (2002, sec. 11.5) make an interesting delineation of nonlinear models into those that are less flexible but under full user control (fully parametric), and those that are black box techniques that are highly flexible and mostly if not fully automatic: stuff goes in, stuff comes out, but we’re not privy to the specifics40.

Two examples of the latter that they provide are projection pursuit and neural net models, though a great many would fall into such a heading. Projection pursuit models are well suited to high dimensional data where dimension reduction is a concern. One can think of an example where one uses a technique such as principal components analysis on the predictor set and then examines smooth functions of \(M\) principal components.

In the case of neural net models, which have found their stride over the last decade or so under the heading of deep learning, one can imagine a model where the input units (features) are weighted and summed to create hidden layer units, which are then transformed and put through the same process to create outputs (see a simple example above). Neural networks are highly flexible in that there can be any number of inputs, hidden layers, and outputs, along with many, many other complexities besides. And, while such models are very explicit in the black box approach, tools for interpretability have been much more accessible these days.

Such models are usually found among a number machine learning techniques, any number of which might be utilized in a number of disciplines. Other more algorithmic/black box approaches include networks/graphical models, and tree-based methods such as random forests and gradient boosting41. As Venables and Ripley note, generalized additive models might be thought of as falling somewhere in between the fully parametric and highly interpretable models of linear regression and more black box techniques, a gray box if you will. Indeed, there are even algorithmic approaches which utilize GAMs as part of their approach, including neural additive models (e.g. Agarwal et al. (2021) and Xu et al. (2022)).

We can definitely take a Bayesian approach to our GAMs if desired, in fact, we already have! When we called the summary method, the p-values are based on the Bayesian posterior covariance matrix of parameters. This matrix is also the basis for the standard errors whenever we use the predict method. So our uncertainty estimates are generally Bayesian-ish when using our default approach for span class=“pack”>mgcv42.

For a fully Bayesian implementation, the brms package serves as an easy to use starting point in R, and has functionality for using the class=“pack”>mgcv package’s syntax style. The reason is that it just uses mgcv to

Results are very similar as we would expect.

Here we compare the uncertainty in the fitted values between the Bayesian and standard mgcv approach43. It looks like the mgcv credible intervals are generally good estimates, but that brms shows a bit more regularization. In any case, it’s easy enough to try a Bayesian approach for your GAM if you want to!

Note that just as generalized additive models are an extension of the generalized linear model, there are generalizations of the basic GAM beyond the settings described. In particular, random effects can be dealt with in this context as they can with linear and generalized linear models, and there is an interesting connection between smooths and random effects in general 44. This allowance for categorical variables, i.e. factors, works also to allow separate smooths for each level of the factor. This amounts to an interaction of the sort we demonstrated with two continuous variables. See the appendix for details.

Additive models also provide a framework for dealing with spatially correlated data as well. As an example, a Markov Random Field smooth can be implemented for discrete spatial structure, such as countries or states45. For the continuous spatial domain, one can use the 2d smooth as was demonstrated previously, e.g. with latitude and longitude. Again one can consult the appendix for demonstration, and see also the Gaussian process paragraph.

The combination of random effects, spatial effects, etc. into the additive modeling framework is sometimes given a name of its own- structured additive regression models, or STARs46. It is the penalized regression approach that makes this possible, where we have a design matrix that might include basis functions or an indicator matrix for groups, and an appropriate penalty matrix. With those two components, we can specify the models in almost identical fashion, and combine such effects within a single model. This results in a very powerful regression modeling strategy. Furthermore, the penalized regression described has a connection to Bayesian regression with a normal, zero-mean prior for the coefficients, providing a path toward even more flexible modeling.

Generalized additive models for location, scale, and shape (GAMLSS) allow for distributions beyond the exponential family47, and modeling different parameters besides the mean. mgcv also has several options in this regard.

In addition, there are boosted, ensemble and other machine learning approaches that apply GAMs. It should be noted that boosted models can be seen as GAMs. In short, there’s plenty to continue to explore once one gets the hang of generalized additive models.

Generalized smoothing splines are built on the theory of reproducing kernel Hilbert spaces. I won’t pretend to be able to get into it here, but the idea is that some forms of additive models can be represented in the inner product form used in RKHS approaches48. This connection lends itself to a tie between GAMs and e.g. support vector machines and similar methods. For the interested, I have an example of RKHS regression here.

In the Bayesian context, we can define a prior distribution over functions and make draws from a posterior predictive distribution of \(f\) once we have observed data. The reader is encouraged to consult Rasmussen and Williams (2006) for the necessary detail. The text is free for download, and Rasmussen also provides a nice and brief intro. I also have some R code for demonstration based on his Matlab code, as well as Bayesian examples in Stan in the same document, though Stan offers easier ways to do it these days.

Suffice it to say in this context, it turns out that generalized additive models with a tensor product or cubic spline smooth are maximum a posteriori (MAP) estimates of Gaussian processes with specific covariance functions and a zero mean function. In that sense, one might segue nicely to Gaussian processes if familiar with additive models. The mgcv package also allows one to use a spline form of Gaussian process. Furthermore, gaussian process regression is akin to a single layer neural network with an infinite number of hidden nodes. So there is a straightforward thread from GAMs to neural nets as well.